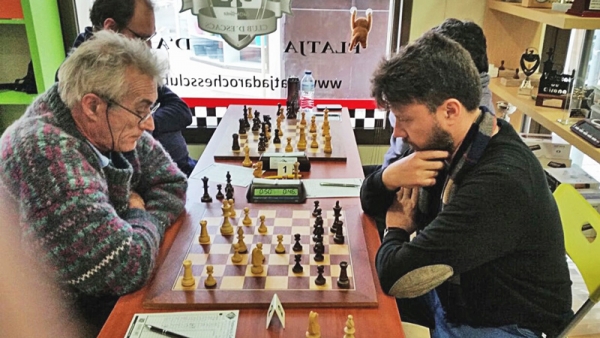 This Sunday we received the visit of the always dangerous team from Llers (Alt Empordà) Dotze Castells, who shared second place along with La Bisbal, Palafrugell and Figueres C, all teams with 2 points out of 3, and we were again with not all players available and with some doubts. Charles returned in the first board, but they could not play Felipe, a little sickness, and Angel, travelling.

Doubts were confirmed when we received the alignment of the visiting team that confirmed our main fears: in the top five we had some theoretical advantatge (in ELO’s terms) but in the last five it had something worse. Expected us a hard match with possible suffering.

10th Board, debutant Joan Díaz Comas "the brother" winning piece during the opening but the position was far from clear, his opponent attacked him with great energy. We had advantage in the first board (Carlos playing a comfortable line against Indobenoni), in the fourth (Rodrigo had a pawn up), in the fifth (David playing a very advantageous Catalan) and in the seventh (Pablo earned also a pawn up). Judà Isanta in the ninth had lost a pawn but he had some compensation, maybe was a sacrifice?.

Around 10:30, we received the visit of the Regidor of Economic Promotion of PLATJA d'ARO, Maurici Jiménez, chess fan, who gave us his support until the final definition.

At 12:00 games starts to definition, and the first point to fall was Pablo Armenta on the seventh board, shortly after made Jordi Díaz Comas, accept draw because he looked a very favourable match, and just a few moments later, our veteran Xavier Bonell put the 2,5- 0,5. It seemed that everything was going to end soon, but Joan Díaz ended up losing a "mad

It was time for the definition, at about one in the afternoon, and one after another all items were defined in our favour!

Carmona, with black, draw in the sixth table with Max Voegeli who plays some edition of our INTERNACIONAL tournament (www.platjadarochessfestival.cat).

Salgado with a big difference of rating with him opponent, Ramón Blanco, who fights very well during around four hours, with some complications, but finally Carlos won with a nice passed pawn.

NEXT WEEKEND we will PLAY in Blanes, Last season when we played at First category in Girona was the more difficult VICTORY of the year, finally both teams growing up to PREFERENT CATEGORY, WE MUST BE STRONG ON SUNDAY!